There was a flurry of activity down the street at the State Capitol.  The 2017 Legislative Session kicked off on Tuesday starting with the opening speeches given by Senate President Joe Negron, House Speaker Richard Corcoran, and Governor Rick Scott. The tone and priorities could not be more different for the three leaders; setting up for what will be an undoubtedly interesting and exciting sixty (or more) days. 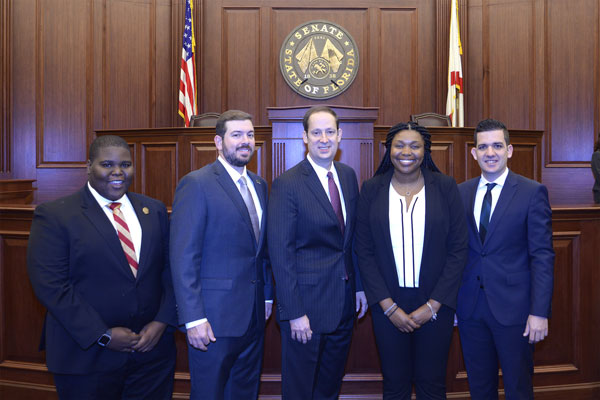 President Negron focused his remarks on the environment, specifically his goal of purchasing land south of Lake Okeechobee to store water when the Army Corps of Engineers orders releases of overflow. Negron also spoke of his desire to elevate Florida’s University System to national prominence through a combination of increased funding and accountability measures. Two Florida State University students were honored with personal invitations by the President to opening day.  William Whitmire and Asya Owens were invited to offer the pledge and sit in the gallery to watch the proceedings. The President met these two students when he visited campus as a part of his statewide university tour last summer. We were also honored to have the College of Medicine’s graduate and faculty member Christie Anderson, M.D. serve as the Doctor of the Day for the Senate.

Speaker Corcoran outlined his legislative priorities which focused more on process and procedure. He listed a number of initiatives instituted by the House to increase transparency and strengthen ethics standards. Specific policy goals included abolishing the economic development agencies because he believes their work to be “corporate welfare,” creating a 12-year term limit for appellate judges, and increasing the property homestead exemption to $50,000.

Governor Scott rounded out the opening speeches with his legislative priorities, one which was in direct contrast to House Speaker Corcoran. Scott laid out a case for the continuation of the Florida’s economic incentives, citing the need to compete for jobs with other states. He also promoted $618 million in tax reductions, with the largest portion of the cut going to a phase out of the commercial lease tax.

One thing is certain; all three sides will eventually come together in order for a budget and legislation to pass. We are fortunate that Senate President Negron has included funding for Florida State University as a priority, and we will be on the front lines providing support for his efforts.

SB 2, the Senate’s Higher Education funding and reform bill, passed the Florida Senate 36-1.  A summary of the bill can be found here. Funding for the initiatives contained in this package will be a part of the Senate appropriations bill which will be revealed later this month.

The House Appropriations Committee held a legislative hearing on Florida’s Colleges and Universities Direct Support Organizations (DSOs). Florida State University’s DSO was established to support the mission and activities of the university with private donations. Vice President of Finance and Administration, Kyle Clark, provided information about our strong accountability policies and clean independent audits of our DSO.

One of the first actions taken by both the House and Senate was to pass a joint rule to govern the budgeting process, which many are lauding as a breakthrough in the process. In order to assure transparency it was agreed that no projects be added to the budget after each chamber has passed their proposals.  Additionally, projects will only be funded with recurring funds at the rate they were funded in the previous year. Any additional funds or new projects that have been fully vetted will be funded through non-recurring dollars.

The Senate released its budget cuts on Thursday, none of which impacted FSU.  We anticipate the House will release its cuts this week, and expect the House will enact significant cuts to all areas of the budget, including higher education.

CS/CS/SB 2 – Higher Education by Senator Bill Galvano (R – Bradenton), establishes the “Florida Excellence in Higher Education Act of 2017” to strengthen funding and programmatic mechanisms so that every student in Florida, regardless of his or her economic circumstances, is able to access higher education and graduate in 4 years with a baccalaureate degree.  The bill passed the Senate last week and is waiting to be heard in the House.  The House Companions, HB 3 and HB 5, by Representative Bryan Avila (R – Hialeah), have been referred to the Postsecondary Education Subcommittee.

The bill is scheduled to be heard this afternoon in the Postsecondary Education Subcommittee.  A similar bill in the Senate, SB 668 by Senator Aaron Bean (R – Jacksonville), has been referred to the Education Committee, the Appropriations Subcommittee on Higher Education and the Appropriations Committee.
PCB EDC 17-02 – Best and Brightest Teachers and Principals by Representative Michael Bileca (R – Miami), amends the Best and Brightest Teacher Scholarship Program eligibility criteria to include additional academic credentials, thereby increasing access to awards under the program.
The bill also establishes the Best and Brightest Principal Program to recognize principals who are able to recruit and retain excellent teachers. With respect to the Best and Brightest Teacher Scholarship Program, the bill deletes the statutory expiration date of July 1, 2017, and amends eligibility criteria by:

The bill creates the Best and Brightest Principal Scholarship Program, which:

The bill provides for repeal of the section on October 2, 2022, unless reviewed and saved from repeal by the Legislature. The bill is scheduled to be heard in the Postsecondary Education Subcommittee this afternoon.  A similar bill in the Senate, SB 110, by Senator Jeff Brandes (R – St. Petersburg), has been referred to the Education, Governmental Oversight and Accountability, and the Rules committees.